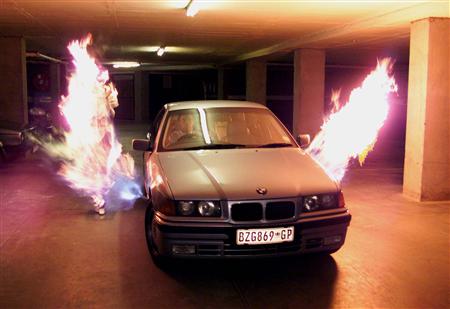 It’s 1998 and car jackings, along with other major crimes, are on the rise in Johannesburg, South Africa. Citizens feel forced to take drastic measures in order to protect their belongings, but they don’t know where to start. Little do they know that one man had the answer.

His name was Charl Fourie, a 33-year-old genius who invented a flame thrower that attaches to the side of the car in response to an attempted robbery.

In 1997, there were about 13,000 confirmed car jackings in Johannesburg. Fourie was fed up with the current options available for self-defense. Especially since attackers often carried weapons. So, he developed the “BMW Blaster”.

The Blaster attaches to the right side of the vehicle near the driver’s door and is designed to ignite when the driver: 1) twists a switch on the dashboard and 2) presses a foot switch close to the pedals. Hold the foot switch down longer, let the flames rise higher.

You’d be happy to know—at least, we hope—that the Blaster did not physically harm the robber, it simply blinded them long enough for the driver to get away.

Check out this video from the Associated Press that features an interview with Charl Fourie showcasing the device:

Sadly, the Blaster did not last on the market. It had cost around $700.00/unit, and that doesn’t include the time it would take to install the device into a vehicle. The product faded out after a few months having only sold 100+ units.

Charl Fourie later became a successful businessman by selling smaller flamethrowers that could be carried by hand. Yet, his legend remains as the man who invented the BMW Blaster. A device that is still legal in Johannesburg.